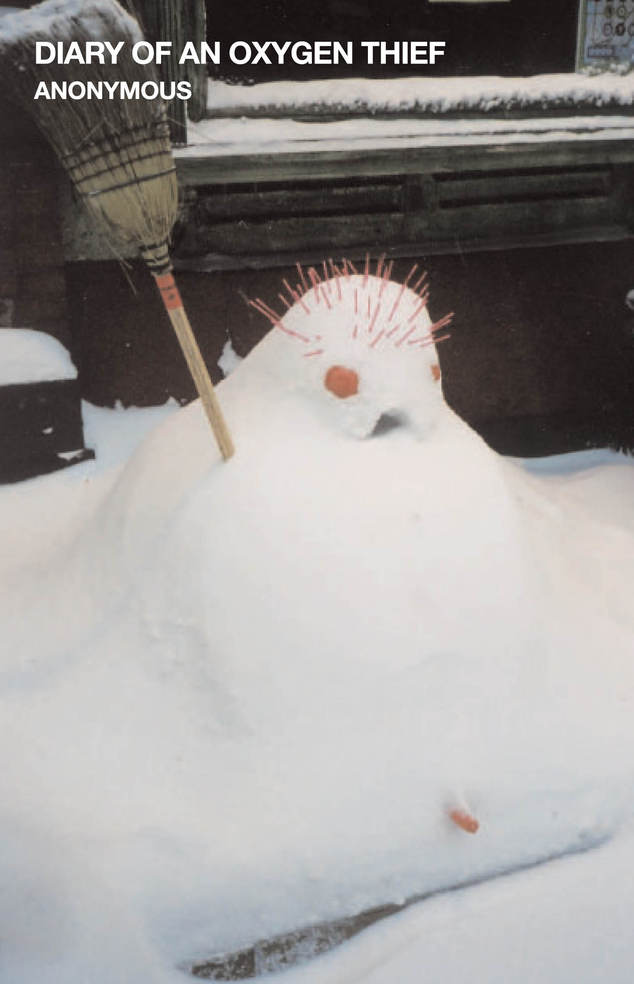 We get a lot of requests for help with book marketing. Many indie authors are overwhelmed at the thought of it. How do you start? How do you build an audience? You’re a writer, not a marketing pro! Well the good news is anyone can market their own book. You don’t need to hire someone to do it for you. Just figure out who your buyers are and then ask yourself where they hang out and what they are looking for. Once you have targets in your scope, it’s just a matter of getting creative with your approach.

In 2016 Publishers’ Weekly ran an article about the clever, creative book marketing behind Diary of an Oxygen Thief (author: Anonymous).

I’m re-sharing parts of the article because this is a fantastic indie success story and important reminder for every self-published author that you can succeed if you promote your book creatively.

Diary of an Oxygen Thief—An Indie Title Makes It Big

The novel was first self-published in the Netherlands in 2006. Over the next few years, the author (who prefers to remain anonymous) sold nearly 100,000 print copies with clever guerrilla marketing that made the book an underground hit. He printed a short run, got copies into brick-and-mortar bookstores, and then created buzz for the book by getting people to google the book’s title and share it on social media, including the book’s own Instagram account.

In May of 2016 Diary of an Oxygen Thief cracked Amazon’s top-60 sellers list and was picked up by Simon & Schuster’s Gallery Books imprint.

Why did the Big Five publisher acquire the novel? Book sales. The author had targeted his audience with laser precision, done the hard work, and cleverly marketed his book to success. Publisher’s Weekly reports:

Gallery’s Jeremie Ruby-Strauss, the editor who finally said yes to the novel, admitted his interest was initially piqued by the book’s sales. He was also intrigued by the author’s marketing efforts, which he described as “creative” and “relentless.” Finally, for Ruby-Strauss, there was value in the work itself…Whatever readers are responding to, publishers should take note of the author’s marketing methods.

Getting The Book Into Bookstores: How the Author Did It

The author started with 1000 printed copies and approached independent bookstores that catered to his target audience: hipsters. Eventually he moved to New York, did another, larger, print run, and then got the book into Barnes and Noble. (Here’s how to sell your book at Barnes and Noble).

After taking one into a bookstore in Amsterdam, he was pleasantly surprised by the fact that he got the title on the shelf. “[The bookseller] held [the book] up and shook it,” the author said. “I think he had this fear, because it was self-published, that it was poorly made and would fall apart. He never looked at the text. He then said he’d take three copies.”

Soon the author was taking requests for bigger orders from the Amsterdam bookshop. He also started getting copies into bookshops in other cities, such as Paris’s Shakespeare & Co.; the stores, he noted, all catered to young hipsters, whom he considered his target market. After moving back to New York City, the author, who was then working freelance advertising gigs, felt emboldened by the success he had selling, and distributing, the book in Europe. He decided to do a 5,000-copy print run of a new trade paperback edition, and to focus almost entirely on selling it…

Amping up his promotional efforts, the author hit several indie bookstores in N.Y.C., gaining particular traction at Spoonbill & Sugartown in Williamsburg, Brooklyn; the East Village’s former St. Mark’s Bookshop; and Nolita’s McNally Jackson. To get copies into Barnes & Noble, the author posed as an independent publisher and pushed the title through the retailer’s small-press program.

The author created underground buzz for the book, and then focused on promotional efforts that would make people google the book’s title and share the image on social media. He put up club-style posters downtown. He pitched the book on dating sites. Readers were encouraged to share photos of themselves with Diary on the book’s Instagram feed. This is creative indie marketing at it’s finest. (Notice that spamming people on twitter and LinkedIn to buy the book wasn’t part of the strategy.)

They prove that expertly deploying imagery of a book on social media, as opposed to trying to place a book in readers’ hands, can be an incredibly effective conduit for sales.

Read the article and be inspired. Diary of an Oxygen Eater is a great example of what can be achieved through creative book marketing, and you can absolutely do it too. Marketing isn’t magic or mysterious. It’s common sense. Know your audience. Where do they hang out? How can you get their attention? Brainstorm. Get creative. Formulate a simple plan. Write it out. Start slowly. BUILD. Be patient…but relentless.

Authors, you got this!

And here’s the article: How Diary of an Oxygen Thief Went from Self-Published Obscurity to Bestsellerdom

Renee D'Antoni: Renee is an editor, photographer, and owner of eBook DesignWorks.

Thanks for telling us about your project.

We appreciate the opportunity to prepare a custom quote for you.
We will review your submission and get back to you shortly.